World Peace 2035
Let's achieve it together!

Let's stand up, create peace and spread it to all corners of our precious, wonderful planet.

Ask yourself the following questions:

Buy now or get a free text sample

"The only thing necessary for the triumph of evil is for good people to do nothing."

How do you feel when you read this sentence? Would you agree that through our passivity we, the very large but silent majority, have created and continue to create the freedom and space for evil to pop up like a tenacious weed and create a lot of violence in the world? Would you therefore agree that all of us, together, are at least co-responsible for what happens in the world? Would you then agree that our inaction and passivity kill? Very uncomfortable thoughts, right?

Peace is one of the most universal wishes for everyone around the world together with good health and happiness. But that is the thing about peace.You do not only wish for it. You make it happen. You make peace.

Everyone is becoming inexorably intertwined. It is time we learn to live in the global mingling peacefully.

If we want to achieve peace, we must first set it as a key objective for humanity.

Achieving World Peace does not require all of us to first become saints. If that were the condition for peace, it would never happen.

You and I, we have no merit whatsoever for having been born in a peaceful part of the world full of opportunities.
We were just incredibly lucky!

Don’t you feel it is our duty and the most basic expression of our humanity that we actively but peacefully defend and expand that reality? Durable Peace is such a fertile ground for prosperity. There are many living witnesses of this truth all over the world.

Passive witnesses and silent contributors to evil that affects our lives and that of our loved ones, in spite of the fact that we could do a lot through simple and easy steps, as I will show in the last chapter.

How would you feel if you were, in your own unique way, a contributor to World Peace?
A true Peace Maker?

How would that add to the meaning and the sense of purpose in your life? How would that contribute to your legacy and reflect on the lives of those who come after you?

About the World Peace 2035 book

This book is a call to action to everyone in the world whatever your nationality, religious beliefs, race, ethnicity, gender or age.

Our world leaders do not make peace a priority.

Therefore we, the citizens of the world, will have to take the initiative. Let's make our world a peaceful one for the first time in history. Let us make peace so that all the other pressing problems of humanity can be addressed from that foundation of peace.
Our survival depends on it.

In this book, you will read:

Get a free text sample of the World Peace 2035 book

Get a taste of the WP2035 book. Insert your email address below and click on "send my sample". You'll receive a PDF in your email.

If you have any further questions about the book, feel free to contact us sending an email to contact@worldpeace2035.org

War and peace have fascinated him since his early boyhood. After obtaining a Masters' degree in Bioscience Engineering in 1984 and a Bachelor's degree in Business Administration he started a 20 year corporate career. He traveled to all continents of the world and lived in Asia and the Middle-East from 1990 - 2003. Just before the invasion of Iraq early 2003 he returned to Belgium from Saudi Arabia. He then started his own HR consulting company and became a coach. The next 20 years he will also dedicate himself to help the world achieve World Peace by 2035. 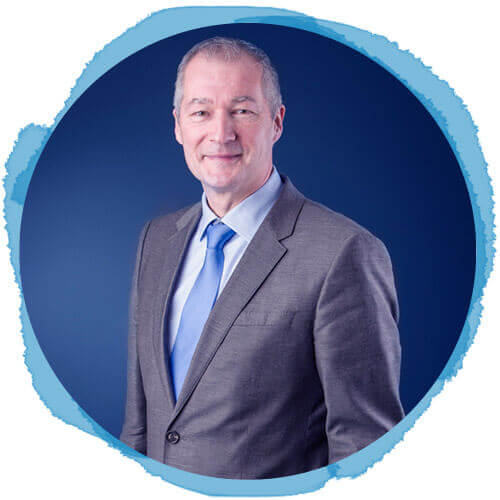 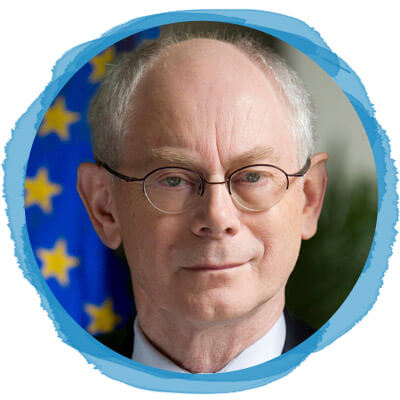 "The European Union and Europe in general are going through turbulent times. After the banking crisis came the economic crisis, the crisis of the Eurozone, the terrorist attacks, the refugee crisis, the war in the East of Ukraine and the Brexit. Sharp nationalism and xenophobia are rising as well as populism. They offer simple yet unreachable solutions for very complex problems. And yet, the European Project has been a fantastic success; it gave more than half a billion people a peaceful society since 1945, even amongst nations which had been enemies for many centuries. The European Union also offered its people a high level of prosperity. Therefore the EU could serve as a model for how to reach and maintain peace in other parts of the world which now know war and large scale violence. A civic initiative such as World Peace 2035 can only be encouraged since participation of and initiative by the general population can give an important impulse to achieving World Peace." 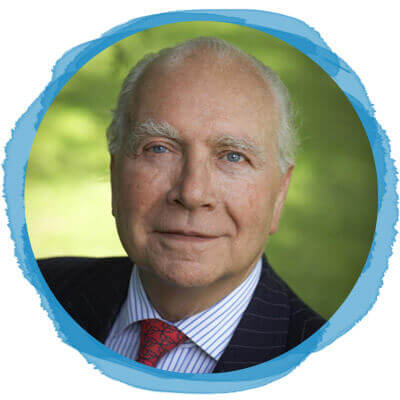 "There is breaking news! The earth is hard and round but the world is flat and fluid. Thanks to science and technology the world is becoming our village. There is, however, a lot of sadness among the people in this world village because the wished for humanity is often not realized. Large challenges are presenting themselves worldwide and require World Peace as an essential lever for the improvement of the human destiny. Cooperation has never been more important especially on an international scale. Bridges have to be built, walls have to be demolished. Nationalism is not wholesome; xenophobia unethical. Peace, however, is a verb. Making World Peace happen is the objective of this wonderful citizens’ initiative “World Peace 2035” and of this impressive book written by Gert Olefs."

Become a peace maker. Support the cause of World Peace by purchasing this book. For every book sold, 3€ or 3US$ is donated to the non-profit organization "World Peace 2035".

See all the available versions below and choose which version you want to buy. 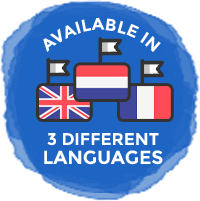 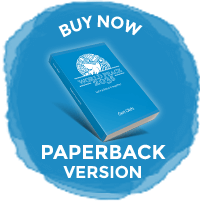 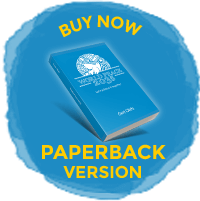 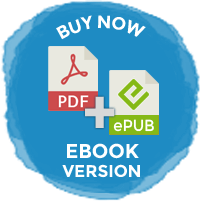 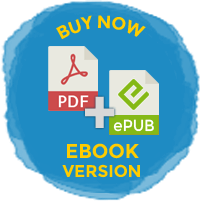 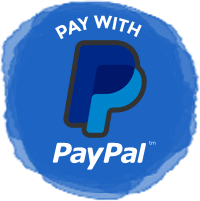 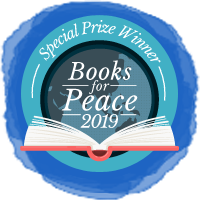 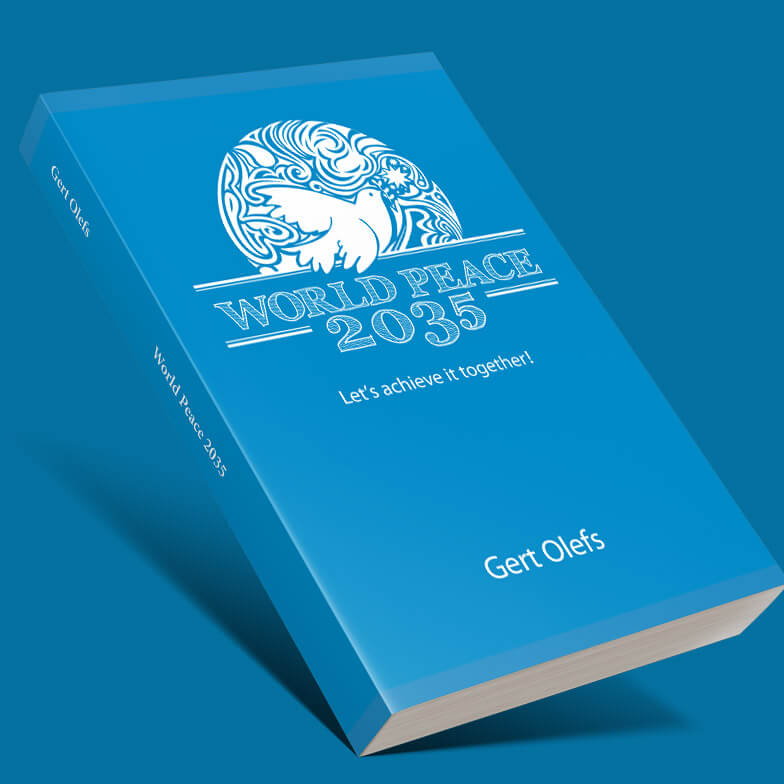 * Shipping costs will be applied on your cart. 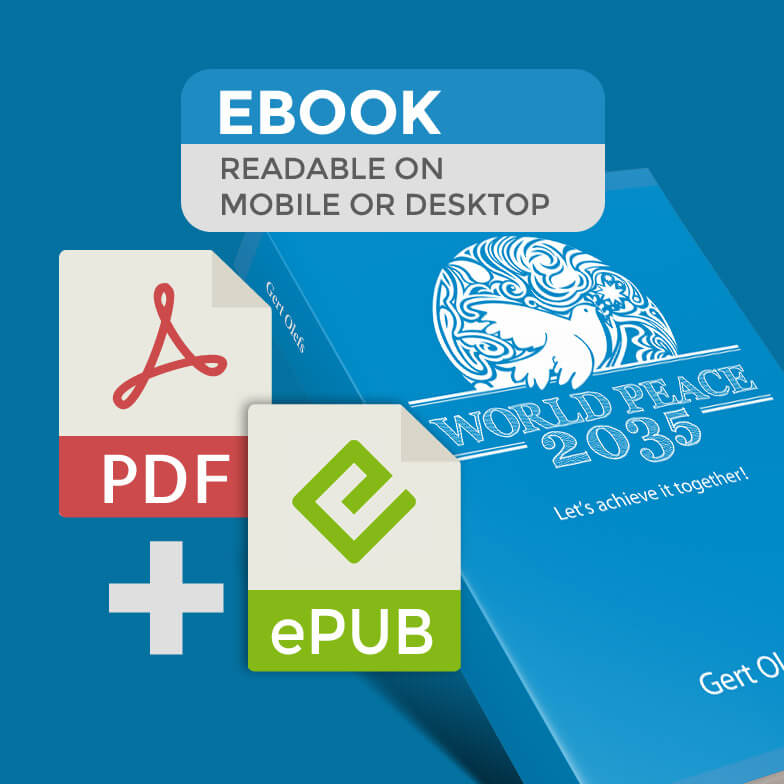 PDF and ePub files, delivered by email. Readable on mobile or desktop.
No shipping costs! This is a virtual product.